Strona główna Top 10 One week in Poland? 10 places that you must visit

A week – that’s the average when we ask tourists how many days do they spend in Poland. Kraków, Wieliczka, Oświęcim and Warsaw are the most popular destinations. Come on! We have a lot more to visit. A month is not enough! There are 10 places that you must visit in Poland. So choose something special.

Wrocław is one of the most beautiful cities in Poland in which you can find everything that a modern city needs. They say that Kraków is beautiful, but they haven’t seen Wrocław!

If you want to have fun, you’ll find clubs. If you’re interested in history or architecture – you couldn’t have imagined a better choice. You can hang out at Market Square and eat in one of the fancy restaurants or take a boat cruise on the Odra river. You should visit the third biggest zoo in Europe including the famous Afrykarium oceanarium. It’s the only one in the whole world dedicated to animals from Africa.

We’ve got hundreds of castles in Poland and dozens those of the Teutonic Order. You’ve almost certainly heard about Malbork Castle as it is in fact the largest in the world. It really is and it’s impressive! You’ll also find Teutonic castles in Kwidzyn, Reszel, Gniew, Sztum and Toruń. Just type one of those names in your GPS and go there! You won’t be disapointed.

Poles just fell in love with this small beautiful city in Lublin voivodeship. It’s famous for it’s unique architecture and film festival during July/August. This charming town is located on the banks of the Vistula river, ideal for a cruise if you have the time. If you like wander around you can climb the Three Crosses Hill or one of the gorges around the city. And did we also mention that there are two castles: one in Kazimierz Dolny and the second in Janowiec village just on the other bank of the river?

The Warsaw Uprising was one of the major events during World War II in Poland. Soldiers and civilians were fighting the Nazis for 63 days. The uprising was futile, but nowadays we do not judge but pay tribute to the soldiers of the uprising. We strongly recommend a visit to this museum where you can pay your own tribute to those who lost their lives and try to understand more of what happened. You can find this place in Warsaw, the capital city.

Zalipie is considered to be the most beautiful village in Poland. It’s because of colourful floral-patterned paintings on the white walls of houses. Actually it was all started by one woman Felicia Curyłowa who decided to paint her house like that and fortunately other women followed her. They renew paintings every year in July so summer is the best time to go there. Zalipie is located nearby Kraków.

Also known as Kraków-Częstochowa Upland, Polish Jurassic Highland is a land of castles and rock climbing. This is one of the best places to find a lot of beautiful castles. There are dozens of strongholds that formerly guarded the Silesia. They are called the Eagle Nests. Today it is the most popular place in Poland for outdoor climbing. You can do the trail of Eagle Nests by bike or by car as well.

Lower Silesia is the most mysterious regions in Poland. It is located in south-western Poland. Some people say that mysterious corridors in Owl Mountains cover World War II secrets. Tunnels of a so called underground city Riese (german: Giant) were made by prisioners of Nazis for an unknown purpose. There is a theory that it was meant to be Hitler’s headquarters. There is another theory those corridors are connected with those found under the Książ castle but no one has proved this to be the case.

Tatra Mountains are the highest and most incredible in Poland. You might have heard about Zakopane which is called the winter capital of Poland. It is located near to Tatra National Park in the Lesser Poland Voivodeship. Tatras are famous for the highest peak in Poland (Rysy), beautiful valleys (like Gąsienicowa Valley), waterfals (Siklawa, highest in Poland) and amazing lakes located in high mountains. Famous lakes include Morskie Oko (Sea Eye) and Wielki Staw Polski (Grat Polish Pond). Everybody falls in love with Tatras, and we are certain you will too.

Must have – Kraków and all places around

Ok, we just couldn’t have missed it. Kraków just has to be on the list. Everybody visits Kraków and calls it Cracow. The city itself is most known from the Wawel castle, the stronghold of kings of Poland (yes, we have a lot of castles) that is the most important fortress in our country. You simply must visit the Main Market with the St. Mary’s Basilica and Kraków Cloth Hall. The old jewish district of Kazimierz with synagogues and places of remembrance are also areas of importance.

There are more famous places near to Kraków including Wieliczka Salt Mine and the Auschwitz-Birkenau Memorial and Museum, the German Nazi concentration camps Auschwitz I and Auschwitz II-Birkenau. This is a Holocaust victims memorial. The entrance to Auschwitz is free but remember you need to register online and please remember there is a strict code of behaviour in such a place.

Gdańsk is located in North of Poland near to Baltic sea. You must see Long Market street including the Neptune fountain and Artus Hall building. Well known monuments are Gdańsk Crane and St. Mary’s Church which is the largest brick church in the world. Gdańsk has got beaches and clubs, restaurants and museums including the newest World War II Museum. Westerplatte is the place that Invasion of Poland begun and we recomment you to visit it. Finally Gdańsk is the city that become the birthplace of the Solidarity movement which played a major role in bringing an end to Communist rule in Poland. 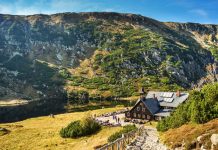